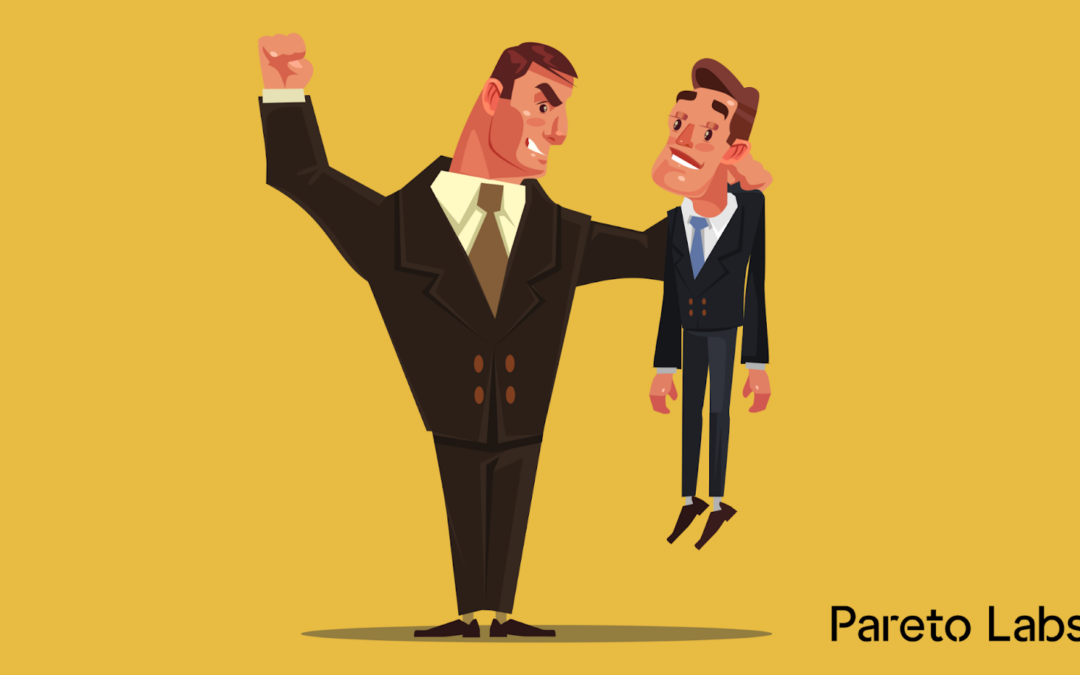 It doesn’t matter which path you take toward self-actualization, whether you’re ascending the corporate ladder or becoming a serial entrepreneur. You need to become a good leader to get where you want to be.

Many brilliant people crash into the ceiling of their potential before ever achieving their goals.

That’s because, to succeed, you have to be able to effectively communicate the strength of your ideas to the world and rally people behind them.

Because leadership is often associated with simple authority and unthinking boldness, it’s all too common for someone to mistakenly embody these negative traits and become a toxic leader.

In this article, we’re going to run through what it means to be a bad leader, including the tell-tale signs of ineffective leadership and how you can correct them on your journey.

As we’ve mentioned, leadership is a field of interest often misinterpreted by those who aspire to it.

People see examples of aggressive, somewhat hostile leadership from famous executives and imagine that leadership is equal to “taking charge” or simply barreling toward your goals, regardless of what’s in your way.

In reality, leadership is more nuanced than that. In most cases, great leaders are the antithesis of the aggressive, controlling autocrat.

Leadership as an academic topic of inquiry has been around for centuries, going as far back as Plato, who pondered what traits make a good leader (or “guardian”) in his Republic.

This was the emergence of the trait theory of leadership — which suggests great leaders exist due to a set of hereditary psychological traits like intelligence and extraversion.

Alternative explanations of leadership began to emerge in the 1950s based on reviews of existing studies.

The findings suggested that people could be capable leaders in some contexts but not others. This “situational” theory of leadership reoriented focus to the behaviors of leaders instead of their individual traits.

This gave rise to the identification of several leadership styles like authoritarian, democratic, and laissez-faire.

The contemporary academic view of leadership integrates these traits, situational, behavioral, and style theories to provide a broader picture of when good leadership emerges and why.

While we can’t effectively measure leadership, we can observe and identify the primary characteristics, motivations, and situational factors contributing to good leadership. They include the following.

Willingness and confidence in assuming a leadership position typically translates to better leadership.

Having a serious concern for completing relevant tasks is associated with good leadership when it’s defined as “the ability to achieve a certain goal.”

When we look at classic examples of excellent leaders like Mahatma Gandhi, Abraham Lincoln, and Nelson Mandela, one thing becomes clear — exceptional leadership is very rare.

Given the wide variety of factors contributing to good leadership, it could be better for your development to note the typical characteristics of bad leadership before assuming a leadership role. This will help you understand what to avoid.

We’ve put together a list of the most commonly cited personality traits, habits, and behaviors of bad leaders from examples in history and contemporary business practice.

Note each one and consider whether you might be at risk of falling into these common traps based on your personality type and business sensibilities.

What defines a leader? Well, among other things, expressing individual accountability for the potential failure of the project or goal is one of them.

Leaders should always take responsibility for the outcome of their leadership, whether good or bad.

When it’s clear that a leader is displacing accountability, it’s too easy for the rest of the team to become psychologically preoccupied with the consequences of failure, which is disastrous for their performance.

As a leader, your role is to design and manage the higher-level strategy toward a common goal. The likelihood of a group’s success is pinned on the effectiveness of your strategy, so take ownership of that fact.

In practice, this could be as simple as informally reminding your team that if you collectively fail to hit your targets or broader goals, it’s on you and not them. In corporate settings, you could go further by designing punitive systems that formally designate you as the accountable figure if things go wrong.

It’s obvious to everyone that a constant feature of effective leadership is a kind of highly motivated single-mindedness.

For all the criticism he gets about his punishing leadership style, you cannot ignore the power of Steve Jobs’ drive and motivation for the specific goals he wanted to achieve.

However, you shouldn’t misinterpret this as stubbornness and total inflexibility.

In business, as in life, one constant is change. Along the path to any goal, countless variables and unexpected events can threaten your existing strategy.

It’s important to stay receptive and open-minded when new information inevitably comes along. You should consult your original strategy in these moments to see if the environment still aligns with your vision. If it doesn’t, you will need to do the hard work of reorienting according to the change.

Constantly ask yourself if your commitment to the original plan is misguided. It may not be, but it bodes well for you and your team if you are open to the idea that it might.

There’s a quiet obsession with leader figures that may as well be imprinted onto our genes.

Whether they are steering a technological revolution or attempting to overthrow the government forcefully, effective leaders almost always display charm, spectacle, and charisma.

Leaders stand as symbolic figures that represent the ideals of the people who follow them. If you lead without strength, persuasiveness, and charisma, you will fail to drum up your group’s interest and ultimately lose the power of numbers.

Some would argue that charisma and charm are innate qualities that can’t be learned. But you don’t have to be the most charismatic person in the world to lead a team effectively. You simply need to stand for something you believe in.

Some leadership positions don’t have a clear goal, objective, or mission for the leader to push for. Think of any newly appointed CEO to a well-established company. Their job is to maintain the foundations that have been set by the company and continue to grow.

This makes it easy to fall into the trap of directionlessness.

Directionless leaders can seem like they’re doing the job set out for them, on paper at least. They’re managing the output of various teams and completing tasks and projects — but does that make them good leaders?

Good leaders act as the North Star for the team that they’re managing, providing a strong sense of direction and movement, even if there’s no tangible objective to aim at.

If you assume the role of a leader, it’s your responsibility to deliver a tangible or psychological sense of direction and progress. Don’t be directionless.

There are several traits that, in any other democratic context, would be considered wholly negative and threatening to the productivity of the group.

But, in the context of leadership, they can be powerful assets toward achieving a common goal.

These are known as negative traits of leadership, and they include things like narcissism and pride, but also authority and decisiveness.

Without a tangible sense of authority and decision-making abilities, it would be hard to even describe yourself as a leader.

For better or for worse, leaders take charge and commit to decisions. Whether the outcomes are positive or negative depends on the quality of your other leadership traits, like intelligence and conscientiousness.

If you’ve risen through the ranks to a leadership position, you no doubt got there through merit and exceptional practical ability.

This foundational technical knowledge of your field and industry is invaluable when leading your team. It will help you understand your strengths and weaknesses, advantages, any technical hurdles to overcome, and more.

But, it can cause concern for potentially good leaders if they fall prey to over-focus on practical involvement.

Leaders shouldn’t have to take part in the practical day-to-day micro-tasks of a given project. Providing advice and guidance in these matters is acceptable and encouraged, but if a leader is always in the gallows with the chefs, it suggests that there’s no one steering the ship.

How to course-correct your own leadership

It seems that bad leadership originates from not being properly oriented on a few key personality traits and core competencies.

How then can you correct these flaws in your behaviors and demonstrate effective leadership to your team, family, or company?

This is an especially challenging prospect considering the fairly polar dimensions of good leadership. How can one be simultaneously flexible but with a strong sense of direction? Or highly accountable without strong practical influence?

It’s probably obvious to you by now that there is no secret formula for fantastic leadership, and it’s something that is easy to get wrong.

But, by performing a few basic checks, you can implement systems that highlight when your leadership goes awry.

Here are a few good practices for exactly that.

It may seem like obvious advice to keep tabs on your own performance as a leader. However, as leaders are often in the most senior positions, there is no system in place encouraging this honest self-examination, so it often gets forgotten.

If you want to be an effective leader, you must be willing to coldly and impartially evaluate your performance as often as possible.

The truest test of leadership is the apparent enthusiasm (or lack thereof) for you as a leader from your team.

Without followers, there are no leaders. So consult your team members individually and as a group to gauge what you’re doing right and what you might be doing wrong.

Remember why you’re doing this. A company installs leaders to bring a group toward a particular goal or objective. You can get clear indications of your performance as a leader by asking the question, “did we achieve what we set out to achieve?”

This is also an opportunity to evaluate your leadership qualities quantitatively.

Everyone has KPIs, including leaders. Pick metrics that are important to your organizational goals and regularly assess whether your leadership is getting you there.

Leading from the front

There are plenty more bad leaders than there are good leaders; that much is certain.

This presents a great opportunity for those who aspire to become exceptional leaders, as there are lots of examples of what to avoid.

Perhaps the most important meta-skill of great leadership is the quality of self-awareness.

With that in your armory, you can begin to honestly evaluate whether or not you are falling into the common traps of bad leadership — avoidance of accountability, weakness, and directionlessness — and not effectively representing the group ideal.